This week is the national #GenomicsConversation week of action, part of a campaign launched by the Genomics Education Programme (GEP) to dispel the myths, explain the facts and outline the clinical impact of genomics. At South East we will be sharing a series of interviews with different health professionals where they discuss how genomics is changing how they care for their patients.

Third in our Spotlight on Genomics series, we interviewed Dr Tony Hulse, a consultant paediatric endocrinologist at Evelina London Children’s Hospital, on why he is pledging to be a Genomics Champion. 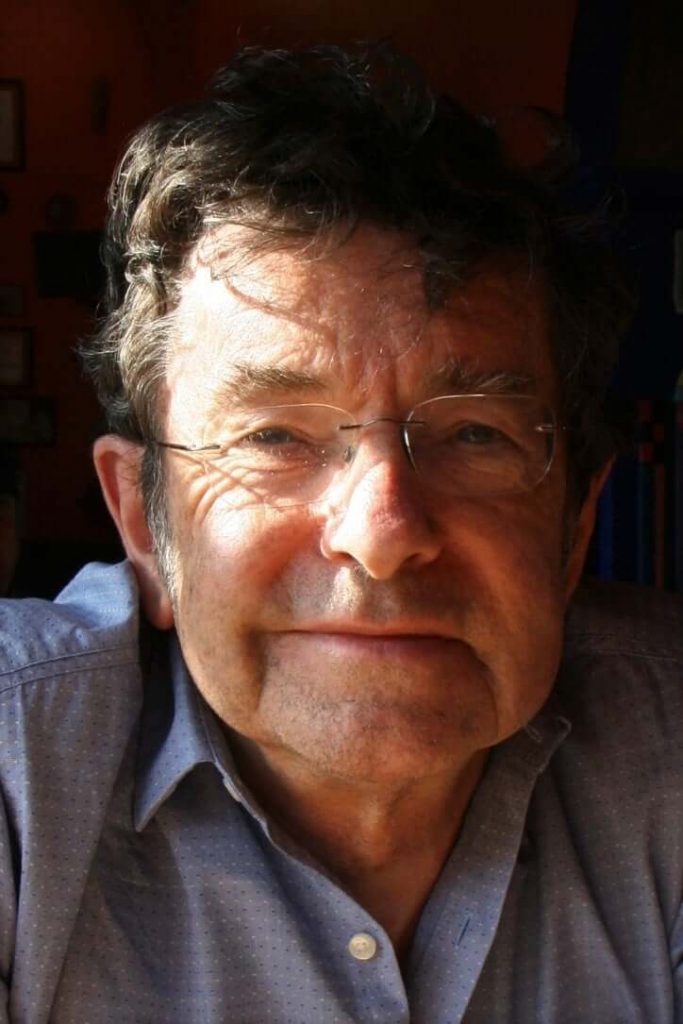 What do you feel are the limitations of using genomic testing as part of routine clinical practice?   It can be very beneficial, but can also increase confusion when changes are found e.g. VUSs – Variants of Unknown Significance. These are changes in the DNA where it is not known if they are causes of disease, or if they are just part of those many changes which make one person different from another. When modern genomic techniques are used, where most of or all the genetic material is sequenced, the chance of finding VUSs is quite high. Our knowledge about these changes is expanding rapidly and there are many ways of trying to find out if DNA changes are significant, but sometimes we still cannot be certain.

Also, our ignorance of significance and probably importance of other epigenetics effects not fully understood. Epigenetics are genetic changes which do not involve changes in the DNA itself. These are changes often occurring in foetal life but after the fertilised egg is formed. Genes all come in pairs and one form of epigenetics is when only 1 of the 2 genes is expressed – used to make proteins. This is often in the copy which comes from the mother. There are a number of epigenetic mechanisms and they are almost certainly very important in human development and are one of the ways our genes interact with our environment.

What most excites you about genomics?   The pace of change, explaining the previously unexplained but also new challenges to our understanding of how genomics works. Occasionally it can make a real difference to patient care.

Together with a colleague from the genetics department, we saw a child who had a number problems going back to his birth, which had not been diagnosed despite a lot of investigations. Genomic testing (Whole Exome Sequencing or WES) revealed a gene change resulting in a diagnosis of a very rare form of multiple endocrine neoplasia (MEN) with a very high probability of the presence of thyroid cancer. This was completely unexpected clinically but unfortunately proved to be the case and enabled us to start his cancer treatment – surgery and subsequently chemotherapy. Genomics enabled us to make the correct diagnosis and start the correct treatment much earlier than would have otherwise happened.

What do you feel are the benefits of genomic medicine for your patients?   A patient of mine, a child with many problems whose original chromosome test performed several years ago (a karyotype) was reported as normal. I suggested to her mother that it be repeated as I still strongly suspected a chromosomal disorder, but using a technique called array CGH, which is much more sensitive than a karyotype. A large deletion was found which explained her condition. The array CGH looks for chromosome imbalances (reduplications or deletions) in all the chromosomes.

With the roll-out of the new Genomic Medicine Service this year, whole genome sequencing (WGS) will for the first time be available as an NHS test and become a routine part of medical care for certain rare diseases and cancers. How do you envisage implementing this within your service?   We have already had results from Whole Exome Sequencing (WES) for some time – for rare diabetes, monogenic obesity, short stature, bone dysplasias, and rare endocrine tumours.

In WES only those parts of our DNA which codes for proteins (about 1% only) is sequenced, instead of all the DNA. These parts are called the exons. Conditions relating to changes in the exons should be revealed by WES, though these conditions can sometimes be caused by changes in the non-coding parts of the DNA. WGS, as the name implies, sequences the whole genome including these non-coding parts of the DNA.

Do you have any suggestions on how we can raise awareness of genomics amongst your colleagues?   Yes plenty – the paediatric endocrine community is well engaged with genomics but this can be extended. Genomic study days are really useful as to detail how it all works, particularly for students and doctors in training. 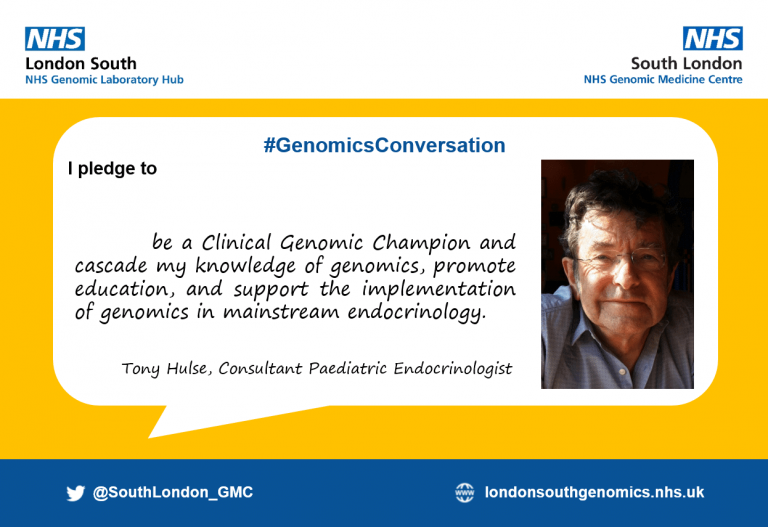 Here’s Tony’s #GenomicsConversation week pledge to become a Genomic Champion in his area.

Do you have any suggestions on how we can raise public awareness of genomics?   The public need to understand that knowing their DNA sequence is only the start. So it needs a huge public education programme – basically to get across that it is not simple!

What does the future hold for genomics in your field?   It will almost certainly have a huge future – understanding growth disorders, fundamentals of links between growth and cancer, epigenetic influences etc.

With any Whole Genome Sequencing (WGS) test ordered, a Record of Discussion (RoD) form will also need to be submitted. This document is to record the patient’s consent for genomic testing and their choice on taking part in research. Guidance on the patient choice conversation can be found here.
This RoD form will be available for clinicians to download from this webpage. Once completed with the patient, it can be send to the lab with the corresponding test order form and sample.
Tests available to order will be listed in the National Genomic Test Directory. A test order form will soon be made available for clinicians on this webpage to download and complete. This form will include the address of the laboratory that the appropriate sample and completed form needs to be sent to.
Until the new Genomic Laboratory Service goes live, please continue to follow existing test order processes.
Later this year, the online test ordering tool for Whole Genome Sequencing will be integrated into the National Genomics Informatics System (NGIS) and clinicians will be able to search or filter to find a clinical indication, confirm eligibility criteria and start the test request process for their patient.