Melita Irving is a consultant in the clinical genetics department at Guy’s and St Thomas’, which provides a regional service across south London, Kent and east Sussex. She has established multidisciplinary paediatric clinics in skeletal dysplasia and achondroplasia at the Evelina London Children’s Hospital. She has published extensively and is author of The Human DNA Manual: Understanding Your Genetic Code.

When I was a medical student I took a year out of medical school to go to UCL and I studied genetics there – mainly human genetics, but there were modules around insect genetics as well. Doing some lectures at the Zoological Society of London over at London Zoo was fun!  It was great when I became a doctor that I was able to practice some of that and put it into clinical application.

Since that time, genomics has really developed and evolved, becoming what it is today. I’ve really ridden the evolution from single gene testing, through advances in chromosome analysis which in many respects is like early genomics, and then more latterly getting involved in the 100,000 Genomes Project and establishing Whole Exome Sequencing for skeletal dysplasia at GSTT as a NHS standard diagnostic test – that’s probably the story so far.

Did your involvement with the 100,000 Genomes Project reveal any interesting or unexpected cases?

A few! One really sticks out as it’s been transformative for this child. He was a boy with extreme short stature and microcephaly. He came my way for diagnostic work up and it was assumed his extreme short stature was related to some genetic disorder impacting his skeleton. He didn’t have the typical findings of skeletal dysplasia but reminded us of a condition called Microcephalic Osteodysplastic Primordial Dwarfism, or MOPD. There are a number of children with MOPD who don’t have a molecular diagnosis. This was one of them.

We recruited him to the Project and found variants in a gene we didn’t know very much about. We were contacted by another group who were also interested in this gene because they too had a patient with, it turned out, a very similar phenotype. We – that is, Ataf Sabir who has been working with me as a clinical fellow in skeletal dysplasia and I – have been working with these other groups, exploring the genomic findings.

Ultimately, we’ve demonstrated that, yes – these are pathogenic variants in a gene which have had the effect of causing this extreme short stature. Now we know how to treat and manage him. His parents have had genetic counselling so they know this could recur with a chance of 1 in 4; they know there’s no need to worry about their other children; they know their child will have bespoke management to follow up the complications that can occur in the context of this condition that mimics MOPD but isn’t MOPD. So this has been transformative.

We couldn’t have done this without the 100,000 Genomes Project. It brought together so many different elements. It provided the opportunity to sequence the genome of this child and both parents; it brought together bioinformatic expertise which was not just within the UK but internationally; we could feed all this back directly to the patient to transform management… this would just not have been possible prior to 100K. 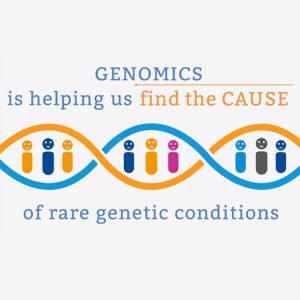 What developments do you anticipate over the next five to ten years?

We’re slowly chipping away at the ‘Diagnostic Odysseys’ that so many of our patients are still on. There are a number of patients for whom standard chromosome analysis provides a diagnosis… but not everybody. The next step was to revolutionise the chromosome testing pathway, so we now use array CGH which can explain rare disease phenotypes in many more patients… but not everybody. Next generation sequencing has enabled us to look at lots of genes in one go, sequence all the coding regions of the genome, and focus our analysis on those areas we think are relevant to the phenotype or those which jump out as potentially pathogenic. So that’s been great. But it still hasn’t explained the phenotypes in all our patients.

A whole cohort of patients remain without a molecular diagnosis. I think there’s going to be an exponential increase in diagnostic rate and also our knowledge of what else is out there in the genome.

That, for me, is going to be the most fascinating element of this development in whole genome sequencing over the next five to ten years.

You had a research seminar looking at a new treatment for achondroplasia at the beginning of November. Could you tell us a bit about that and what developments we might expect to see in the future?

Achondroplasia affects 1 in about 20,000 people and causes disproportionate short stature. It is caused by a very particular variant in the FGFR3 gene and inhibits the whole process of converting the cartilage in your growth plates into bone, entailing they don’t grow properly. The clinical trials I’ve been working in have centred on overcoming that inhibition and allowing the bones to grow normally. 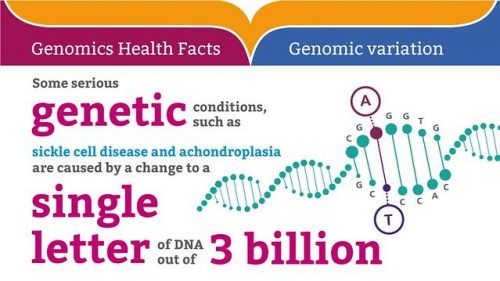 In achondroplasia, we understand the knock on effects of this variant, so that we can start to modify its effects. I see many more opportunities coming from WGS that could open the door for clinical trials and for drug development in many other rare diseases, because it will allow us to understand in far finer detail the knock on effects of these pathogenic variants occurring in genes that cause rare diseases. My hope for the future is we use what we’ve done so far in this single gene disorder with a recurrent variant as a paradigm or model for developing clinical trials in rare diseases, because it’s no longer adequate to get to a diagnosis and pat yourself on the shoulder.

How does genomic testing integrate with your broader clinical practice?

I’m not saying WGS is going to mop everything up. We shouldn’t forget the epigenome which may well have a phenotypic effect we haven’t really started to delve deeply into. I think WGS, just like the previous iterations and evolutions in genetic testing, may clear up a few things but we’ll still be left with the unexplained. Maybe epigenetics will come to the fore across many different situations in rare diseases and medicine in general.

Talking about evolution, and evolution going forwards, recently a child came to see us in clinic for whom we thought that maybe going backwards down the evolutionary trail and doing a standard chromosome karyotype might be a good idea. This child had gone straight for genomic testing without ever having that very basic standard karyotype. Some people present cases of abnormalities in the chromosome pattern detected on karyotype but not picked up on the genomic chromosome testing. Just because we have a fantastic direction to go towards with these new developments in genomic analysis, let’s not therefore forget the things in our toolbox from the past that are still applicable today.

I’m a big fan of mixing modalities, so as we go forward, let’s not forget the past and the benefit tests we’ve used in the past can still bring today.

Welcome to our new home

Hello! Welcome to the South East GLH website. The site is not fully supported in older versions of Internet Explorer. To get the best experience, we recommend that you use Google Chrome or Firefox to browse the site.

OK
With any Whole Genome Sequencing (WGS) test ordered, a Record of Discussion (RoD) form will also need to be submitted. This document is to record the patient’s consent for genomic testing and their choice on taking part in research. Guidance on the patient choice conversation can be found here.
This RoD form will be available for clinicians to download from this webpage. Once completed with the patient, it can be send to the lab with the corresponding test order form and sample.
Tests available to order will be listed in the National Genomic Test Directory. A test order form will soon be made available for clinicians on this webpage to download and complete. This form will include the address of the laboratory that the appropriate sample and completed form needs to be sent to.
Until the new Genomic Laboratory Service goes live, please continue to follow existing test order processes.
Later this year, the online test ordering tool for Whole Genome Sequencing will be integrated into the National Genomics Informatics System (NGIS) and clinicians will be able to search or filter to find a clinical indication, confirm eligibility criteria and start the test request process for their patient.